HomeBlogThe 1st Half of Comrades 2013 UP RUN 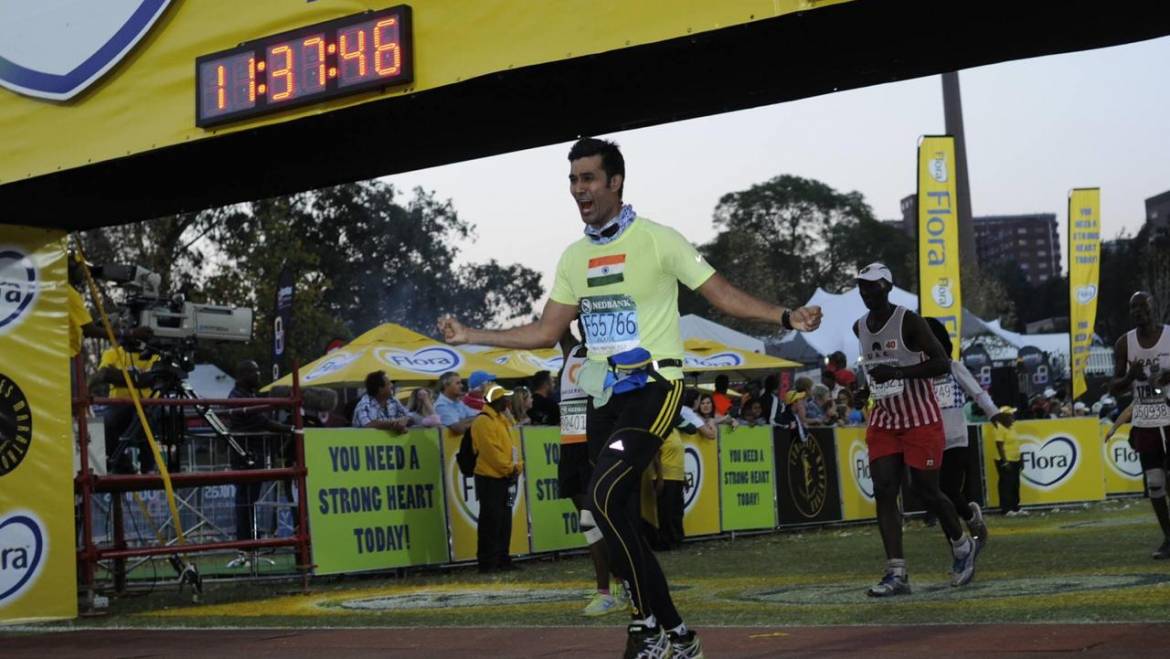 So Finally the D- DAY that we all had been training like Maniacs arrived. 2ND JUNE 2013 finally comes. For me it started at around 3 am where I woke up without any Alarm.
Luckily I woke up fresh…..I got going with my usual activities and just when I got ready with all my Running Gear, I had this strange feeling in my Stomach…Maybe it was Stress, pressure and many other mixed feelings which I assumed would be better once the Run starts.
I also was having a Lower Back Spasm from the moment we Landed and thanks to the EXPO Massages I took, that morning it was a bit better than the remaining days…I also took a PainKiller at night to ensure that there is no pain in the morning when I get up as I was prepared for all types of Pain once the Run starts.
So we are all set to leave our Respective Hotels and are in the Taxi to reach the Venue. It is around 450 AM that we arrive at the Venue. We then somehow made our way to our seeding Area by literally penetrating ourselves through the Crowd.
We then waited anxiously for the race to start and were just wondering when will it eventually start. Just then the DJ who was playing various Re-mix tracks played the South African Song “SHOSHOLOZA.”
I did not understand a single word of it, but it was slow and catchy.. While this Song was played we happen to spot in front of us a person who was waving an Indian and a South African Flag together. HE was basically a Indian Settled in South Africa for a long time.
It felt great looking at the Tri-Colour and the emotions were at an all time high…..just then the music changed and the SHOSHOLAZA song was followed by my All time favourite instrumental music – “THE CHARIOTS OF FIRE.”
Vow….what a feeling it was listening to this song and while this song was going on I closed my eyes and thanked GOD for making me Reach here. I simply thanked him for giving me all the possible resources to Reach
The start line FIT, HEALTHY & MOST IMPORTANTLY INJURY FREE and in the RIGHT FRAME OF MIND…
The pressure was mounting and the music piece was getting over…..
As soon as it got over…..there was a big rooster cuckoo sound followed by a GUN SHOT….. “BANG !!!!!!!!!!!!!!!!!!”

For 1st time runner like me I could not believe that the Race started even though I heard the GUNSHOT. The reason being in spite of the GUN SHOT we couldn’t move an INCH for the next 20 – 30 seconds or so…
I was blank for sometime as to what was happening and why isn’t any1 moving?? I quickly looked ahead and what did I see????

RUNNERS RUNNERS EVERYWHERE……… I mean I agree that in all Start events there are many Runners, but for a SCMM FULL MARATHONER, the maximum number of runners seen on the
start line would be around 4000 max so when the race starts all move together…
However; Here we are talking about 19000 Runners…..Just Imagine how would the scenario be? I could not see the ROAD at all be it front or back. It was like watching an HOLLYWOOD EPIC WAR MOVIE where Thousands and thousands of soldiers are Marching Ahead to Fight a BATTLE.

That is when I also realised, YES….THIS IS A BATTLE and WE ARE SOLDIERS AS WELL.
This is a Battle with oneself to achieve the GOAL SET OVER THE MONTHS BY SACRIFICING SO MANY THINGS IN LIFE.
A Battle where one has to keep fighting for 12 hours to ensure that the people back home who are tracking you are praying for you, cheering you and LOSING THE BATTLE IS NOT AN OPTION.
A Battle where No matter when or where the PAIN Surfaces in the Body, MOVING FORWARD IS THE ONLY WAY TO SURVIVE and SUCCEED.

I Said to myself, that if this is a Battle, SO BE IT…and BRING IT ON as I am a Trained SOLDIER who has done all the possible Training that is required to fight and Conquer it…
The crowd started Moving and so did I…..It was like a VIRAR LOCAL for the first few Metres and FINALLY after 3 Minutes, I CROSSED THE START LINE…..

IF SLOPES COULD KILL….

OK, so we start and pass from the City Hall towards Pietermaritzburg….Thanks to the BUS TOUR I realised 1 thing that throughout the ROUTES there are SLOPES and MORE SLOPES.
While training in Lonavala and our various discussions with COMRADES, all I could hear was the 5 Hills. FIELDS, COWIES, BOTHAS, INCHANGA AND POLLY….But let me tell you guys besides this also there are So many
Unnamed Hills which is like a SLOW POISON and they indeed KILL YOU SOFTLY.
The first mini slope comes at around 2.5 km which is the TOLL GATE and from there we move on to the 45th CUTTING which is yet another slope…. The weather also was acting Funny.
All this while we were training in Night hours at Lonavala assuming we are simulating South African Conditions…and what we eventually get after reaching South Africa is a Mumbai Marathon Type Weather…Funny isn’t it??????
Anyways, back to the run….
Upto the TOLL GATE I was with Dilip Patil and Sandesh. However after crossing TOLLGATE, I had to take a Pee Break which I did hoping I would catch them in a few minutes.
But there were so many people it was impossible to spot them. I Crossed Amit and Neepa who were Running together. Waved them a Hi and moved forward searching for Dilip Patil and Sandesh.
They were running near the same Flag person having Indian Flag with him.
So I was chasing that guy assuming Patilsaab and Sandesh are around that person but I never found them and neither did I realise that I overtook them until I reached DRUMMOND.

My Strategy was Simple….. just take things easy in the 1st HALF which was all the way to DRUMMOND.
Before DRUMMOND what I had to encounter was the FIELDS, COWIES & BOTHAS which I had to take it slowly. So I decided to WALK all these Slopes Completely… and wherever Downslope or a FLAT Terrain comes I run at a pace of 6 mins per km.
The 1st Down Slope came and I thought lets cover up. I increased my speed, but yet again there were so many runners on the route that it was increasingly difficult to run at a steady pace and this was irritating me. I had to constantly pass them by changing directions left and right and in the process I was also disturbing others as well….
I thought I cannot run this way and in a way I was running at their Pace which was not my plan.

Just then I saw that on the Extreme LEFT there is a FOOTPATH….a FOOTPATH With a regular Route unlike in INDIA where you have Food stalls all over them.
I simply walked towards the Footpath and then all I had to do was run there without any disturbance. Nobody in Front of me. Looking at me running there, many people followed me, but I was glad they were behind me.
Then what, it was simple…wherever I spotted a Footpath, I used to separate myself from the Crowd and cover up on the distance.

Eventually I Arrived at FIELDS HILLS.
The night before Comrades; Patilsaab set a simple Formula which we all followed. The formula was whenever OUR GARMIN indicated the KMS as 15, 22, 35 and 45, All we were supposed to do was WALK…No matter what…JUST WALK till that HILL Is over.
As a good student I am, I did the same….
ALL these Months I was simply thinking that THE SLOPES ARE SURELY GOING TO KILL US WHILE RUNNING THE COMRADES!!!!
AND I did realise while Walking that These were not Normal SLOPES like in Lonavala, or PALI or Mount Merry….These are DEADLY SLOPES and IF I DO NOT RESPECT THEM, THEY COULD KILL and KILL ME EASILY MUCH BEFORE DRUMMOND ITSELF….
I started climbing COWIES and just when I started the incline I was getting bored as I was all Alone. I thought of Updating my RUN STATUS to my WIFE as I knew she was Very tensed about my RUN.
I sent her my status and she responded back to me telling me to take care and wished me all the best yet again….
I Clicked my photograph and sent it to her assuring her that I am Fine…and I sent the same snap and status to my other Family (TOPGEAR FAMILY) who were anxiously waiting for all the TG RUNNERS to cross the 1st Half as only after that they could track us.
As soon as I sent out a message, all the members got excited and started wishing me luck and sent various messages which I read only the Day After.
But I realised 1 thing while I was sending messages to my Wife and TG on WHATSAPP……
I DON’T EVEN KNOW WHEN DID COWIES HILL CAME AND WENT AWAY AS THE MOMENT I KEPT THE PHONE IN MY POUCH I SAW THE FLATS APPROACHING AND I WAS BACK TO MY FOOTPATH RUNNING STRATEGY!!!!
I decided that THIS IS IT….let me Chit chat with my Wife and TG Gang and even if I update them once that will make them thrilled and I won’t realise the Hills passing by as well J. IN SHORT, THE FEAR OF SLOPES WAS SORTED OUT….AT LEAST FOR THE TIME BEING!!!!!!!!!!!!!

SLOPES ARE MY FRIENDS….

FIELDS HILL arrives…and this time I greeted it with a Big Smile on the face….i said time for Gossiping and catching up with my Friends….. J. IN SHORT SLOPES = FRIENDS J

My BB was out for some photographs and I gave my update as planned and continued walking and clicking a few more pics…..and within a matter of time FIELDS was Behind me..i was like Vow..this is cool….
Just when the Flats arrived there was a Medical Camp there….I told myself that it has been over 28kms now..and high time that I should do some ICING as what I had followed in Lonavala…
I took some ICE and applied it on my Legs…but nothing happened…. NO COLD FEELING Because of the SKINS that I was wearing….i was like WTF….how do I do the ICING NOW….
I decided to move forward and as better sense prevailed I Took the Water Sachets opened it and sprayed the water with a strong force on my Quadriceps…it felt so good… the Spray was doing like a Massage Effect on the Legs and the Cold Water was ICED WATER thus giving me an effective solution to my ICING PROBLEM…J
Few more kms down and at 35kms it was the BOTHA’s Hill after which it was Downway and Flat terrain till DRUMMOND…..
After conquering BOTHA’s I was simply telling myself that now only 2 more Slopes left and the rest of the Terrain is flatter compared to the 1st Half so things will be easy So no more Chatting on phone and concentrate on the Race till I reach INCHANGA.
I Crossed Drummond at around 5.18 hours and that is when I felt that HALF THE BATTLE IS WON, and another half to go…it was like…TOUCHWOOD I’m still feeling Fresh and Raring to go…. Which means I could complete the Race…..VOW….for the very First Time I could imagine the MEDAL AROUND THE NECK!!!! (Whether BRONZE or FINISHERS??? Tht is I didn’t know yet).